The next animal that I have decided to write about is a large predator that is probably familiar to most people with the scientific name Canis lupus. The animal that I am referring to is the gray wolf. Wolves are predators that had been hunted to near extinction at least in the wild around the 1930s. These animals as much as a nuisance they are on some human lives by eating domestic animals have many positive effects of their predation so that they were reinstituted into environments including Yellowstone national park. Wolves grow to be about 50 to 80 inches in length and about 40 to 175 pounds. Wolves also have a range of colors from brown to gray to black. They tend to be a little larger than the average dog. Wolves are social animals and tend to be a part of a pack with about 6-8 members. Wolves are also territorial and tend to define that territory through group howling. Packs tend to be very structured with a male and female alpha that control where the pack makes a den and hunting patterns. Howling is used within a pack to tell other members where they are in relation to the pack or to tell other wolf packs where the wolves territory is. Each wolf has a unique howl like a human fingerprint in order to tell individuals apart. Wolves are mammals so they can regulate their own temperature. Wolves also reproduce through sexual reproduction with internal fertilization. oftentimes it is only the alphas who will mate and reproduce. The entire pack will care for the baby wolves who are born sightless and defenseless. The pack will watch over them and bring them food until they are able to hunt for themselves. The gestation period for wolves is about 63 days with a litter size of 4-7 pups. Mating season is late January to March. Wolves prefer to hunt elk, deer, and other large hoofed animals, in so doing they keep those populations down which has many beneficial effects for other animals and many plants. These effects can range from keeping species from being eaten or providing food for other animals species. 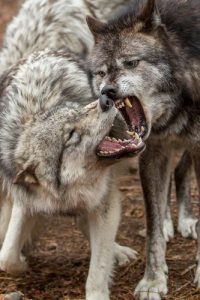