The next species that I have decided to write about is a amphibian that most people would recognize. This species has the binomial nomenclature Pelomedusa subrufa. It has the common name african helmeted turtle. It is a species of turtle that is omnivorous. The length of the shell is about 15cm. The turtle is brown colored. The animal is vertebrate so it has a backbone. The animal is triploblastic and is a coelomate so it has a coelomic space. The turtle has a shell which is used to protect it from predators. This turtle species also produces an unpleasant odor that makes it undesirable for consumption by predators. There is some sexual dimorphism with the female having a broad shell and short tail while the male has a longer tail and a narrower shell. They are semi aquatic creatures and are present in most of Africa. The habitat tends to be muddy areas or creeks. During the dry season they will burrow into the bottom of mud pools and remain dormant until the next rainy season. Since they are omnivores they eat both plants and animals including other turtles. Their main diet is meat from small crustaceans, fish, earthworms, and snails. In large groups some may hunt as a pack to bring down larger prey like birds or other reptiles. They tend to be aggressive when eating and will drown their prey before eating it in the water. During mating season males will follow females and extend their head onto their back to try and initiate mating. If this does not work they will bite the back legs of the female until they are able to mate. Females will lay about 14 eggs which are covered in slime and placed in a nest to hatch. 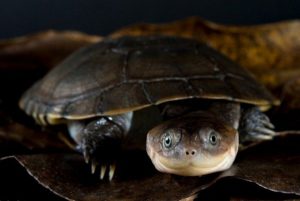