The next animal that I have decided to write about is one that has gotten around something that most people fear and worry about often. This is a jellyfish with the scientific nomenclature Turritopsis dohrnii. This species has found a way to avoid death and is biologically immortal. At least in a sense this is true. When the jellyfish is an adult and comes under extreme stress such as an injury it will transform into an earlier stage that releases multiple copies of the same genetically identical jellyfish as juveniles. Since it is not going through its normal channel fo sexual reproduction which would include making gametes and fertilizing an egg, it can be said that the same individual is reverting to an earlier stage of its life cycle to live again. The life cycle of jellyfish involves multiple stages. The first stage is a fertilized egg that hatches into a planula that is free swimming for dispersal. The planula will then find a place to attach and become a polyp. The polyp will go through a process known as strobilation which will produce several genetically identical copies of itself as juvenile jellyfish that will then grow to be adult jellyfish once they are producing gametes. So in a way it can be said that it is immortal, but an argument can be made that it is going through asexual reproduction in a way. Jellyfish are invertebrates meaning that they have no bone structure but move by jet propulsion out of their mouth. Jellyfish also have stinging cells called cnidae which is why jellyfish are considered poisonous since the cell contains a toxin. This particular jellyfish is about 4.5mm or 0.18in across. It also has up to 90 tentacles. The jellyfish only has one opening to the digestive system. The organism is distributed around the world’s oceans. To eat the organism will stun prey with the cnidae on its tentacles and then bring the food to its mouth where it will be digested and any undigested prey will either be digested intracellularly or excreted out the mouth. 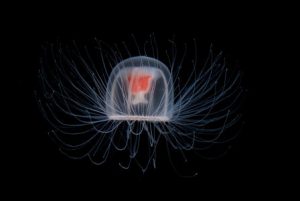 AMNH. (2015, May 4). The immortal jellyfish. Retrieved November 15, 2016, from http://www.amnh.org/explore/news-blogs/on-exhibit-posts/the-immortal-jellyfish/

Murai, T. (n.d.). [Turritopsis dohrnii, the so-called “immortal jellyfish,” can hit the reset button and revert to an earlier developmental stage if it is injured or otherwise threatened.]. Retrieved November 15, 2016, from http://www.amnh.org/explore/news-blogs/on-exhibit-posts/the-immortal-jellyfish/