This next post will be a little different since it will not be focusing on a single species but rather a type of organisms within a class. This class is stelleroidea and the group from that I will be focusing on in that class is the sea stars. Sea stars are in the phylum Echinodermata. The name of this phylum literally means spiny skin which is true for the sea stars. They have five arms and a radial pentamerous symmetry pattern, which means that it can be put five ways to form two symmetric halves. The ecological role of the sea star is that it is a predator. It feeds mostly on barnacles and other invertebrates. The sea star itself is an invertebrate which means it has no spinal structure even though it still seems hard and has a definite shape. This is because it has structures that give support to it made out of calcium carbonate called ossicles. The sea star has two stomachs. The stomach closer to the mouth is called the cardiac stomach and can be protruded out of the mouth to start external digestion for larger prey. The second stomach is called the pyloric stomach and extends into the arms. This has two uses, it increases the surface area of the stomach for increased breaking down of organic material and it serves to distribute nutrients throughout the body. Something weird about a sea star is that it doesn’t use its arm to move. alternatively, it uses tube feet that are controlled by ampulla that contract to fill the tube feet with water so that contracting different tube feet that are all over the bottom surface will move the organism along a substrate. The sea star also has appendages called pedicellariae which remove material from the surface of the body. The sea star is also considered a keystone species which means that it has a large impact on the diversity of an ecosystem even though it may not have the most biomass within that ecosystem. It has this impact by eating its prey (a species of barnacle) which if left unchecked will outcompete most other species in the intertidal zone decreasing diversity drastically. 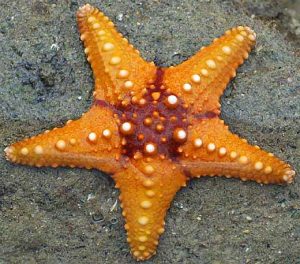