The next animal that I have chosen to write about is an invertebrate that is pretty smart. It is a species of cuttlefish with the scientific name Sepia officinalis. the more common name for this species is the European cuttlefish because its habitat is the Mediterranean, North, and Baltic seas. The cuttlefish is a cephalopod from the phylum Mollusca. This species has a lot of cephalization meaning that it has many clusters of sensory organs near its head. The cuttlefish has even been documented to have good learning abilities. It is an invertebrate meaning that it has no internal skeletal structure, but since it is aquatic it does not need one as the density of the water is able to provide support for its structure. It moves by jet propulsion but also uses the fins on the sides of its mantle to swim. It has eight long arms and two long tentacles that are used for prey capture and can be retracted completely inside of the body. It also has an internal shell called the cuttlebone that helps it to stay buoyant, because it can fill or empty of gas depending on its needs. It is a predator that eats mainly fish and crustaceans. The primary predators of the cuttlefish are sharks, dolphins, seals, and large fish. The cuttlefish reproduces sexually. There is a lot of fighting over females, and the males use bioluminescence to impress females. When a mate is chosen they line up head to head and the male transfers his sperm into the females mouth, which she then stores in a pouch under her mouth. The female then goes to lay the eggs and can choose which sperm to use if there was more than one male that she mated with. Cuttlefish die soon after reproduction. The most interesting thing about these organisms is their defense mechanisms. Not only can they ink like an octopus to distract and confuse predators, but they can also camouflage themselves at will to evade detection by predators. They are able to camouflage themselves at will due to some cells called chromatophores which are expanded or retracted by muscles to control color. Iridophores and leucophores are also part of the coloring mechanism since they reflect light. They are also able to change their texture using papillae which are muscles that can extend outward from the body or be pulled back in. The effect that this gives is that the cuttlefish can either be smooth or very spiky.  Photophores are also present in the camouflage ability and allow the cuttlefish to bioluminescence. 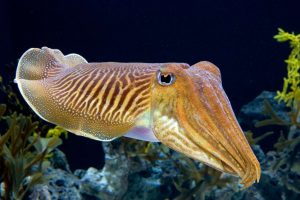