The next animal that I have decided to write about is the largest land mammal on Earth with the scientific nomenclature Loxodonta africana. This animal is the African elephant. The African elephant can grow to be about 8 to 13 feet tall. The elephant can also weigh between 2.5 to 7 tons. Since it is so large it is also a prodigious eater consuming about 300 pounds of food a day. The elephant has a rather unique limb called the trunk which is actually a long nose used for drinking, grabbing, and moving. The elephant also has tusks that are used to dig, find food, and fight at least in males. they are herbivores and so eat vegetation including the wild grasses that are so present in the African savannah. The females of the species live together in herds that can consist of as much as 100 elephants. The largest and oldest female is usually the leader called the matriarch. The males of the species tend to be more solitary. The animals go through sexual reproduction with internal fertilization. The gestation period is the longest of the mammals at about 22 months or two years. The babies are called a calf and weigh about 200 pounds and are about 3 feet in height when they are finally born. The herd cares for the young and protects them. Elephants are known to be extremely intelligent with many emotions. They also have a long memory over years that they use to remember routes to watering holes as they go nomadically around the savannah. Since they live in such a hot environment it is not unusual to see elephants “showering” by blasting themselves with water through their trunks. Afterward, they usually put dirt on their skin in order to protect it. There is also evidence that the elephant can communicate over long distances by creating a sub-sonic rumble that other elephants can feel in their skin. Elephants are close to being endangered since they have been hunted for their tusks which contain ivory used in many man-made products. Without the protections that are in place now banning the hunting of elephants for their tusks they would certainly be endangered and maybe instead of being almost endangered they would be almost extinct. 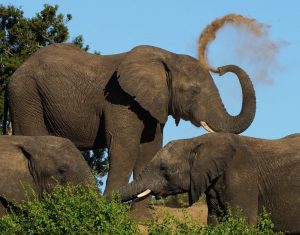