The next species that I have decided to write about is an insect that is very elusive. The scientific name for the species is Euspinolia militaris, but the common name for the insect is the panda ant. The name is fitting to a degree, but is also widely inaccurate. The “ant” is actually a species of wingless wasps. It is nicknamed panda because its coloring and markings resemble those of a panda. The panda ant was discovered in 1938, and has a habitat of Chile’s dry coastal regions. Since the panda ant is an insect it is also an invertebrate meaning it has no bone structure, and instead has a thick exoskeleton. The exoskeleton on this particular species is very thick so that researchers sometimes even have trouble getting a steel pin through it. The thick exoskeleton is also useful to retain water.  The panda ant also has a powerful sting. The sting is so powerful that it has been able to kill cows(most likely through more than one sting).  The panda ant also displays extreme sexual dimorphism, which means that the female and males of the species are so different that it is hard to know they are the same species unless they are seen mating. The males of the species are much larger and have wings. The females of the species are wingless and are the only ones that have stingers. The males are nocturnal, while the females are active during the day. The insects reproduce sexually and have an unusual mating ritual in which the male carries the female while flying to mate. After mating the female will lay her eggs on the eggs of another species. The eggs will hatch and then eat into the larvae of the other species for its first meal. It will grow for a time inside the larvae and eventually kill it. Once it emerges the insect eats only nectar. The panda ant lives for about 2 years, and lays about 2000 eggs at a time. 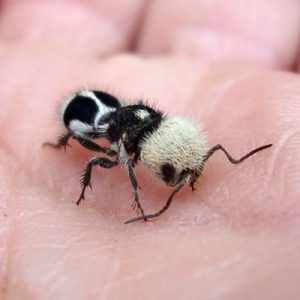 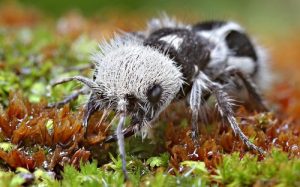 The organism that I have decided to write about this week is an amphibian with a strange genetic change from its common ancestor. Instead of metamorphosing from its larval stage so that it will live both on land and in the water it is completely aquatic and remains in its larval stage. This organism has the binomial nomenclature Ambystoma mexicanum. The more common name for this organism is the Axolotl. It was discovered in Mexican rivers that are now being imposed upon by Mexican expansion which has earned this animal a spot on the endangered species list, at least in the wild. It is used as a test subject in many scientific labs, and is also kept as a pet by many people so that in captivity at least the animal is safe from extinction. There have been some efforts to breed and release the organism back into the wild, but efforts are not very successful due to the river being imposed upon by cities so that the axolotl’s natural habitat is disappearing. The axolotl is an amphibian closely related to salamanders that stays in its larval stage for the entirety of its life. It does grow bigger than normal larval stages of similar species. It even has legs and lungs, but breathes primarily through its gills. The axolotl also does become sexually mature in this stage as well. The axolotl is carnivorous. axolotls in captivity have a slightly greater variety in color than those in the wild ranging from black, white, brown, and yellow with various shades in between. The axolotl also has another strange adaptation which is why it is used in labs in captivity. The axolotl has healing and regrowth properties greater than that of a normal organism. The axolotl is able to totally regrow limbs whereas most species cannot. this prodigious adaptation is being used in laboratories and has interested many in potential products and valuable information that could affect humans. studying the methods and adaptations of the axolotl that allows it to regrow limbs could give us a way to do it for ourselves or at least lead to products that help in tissue regrowth if not whole limbs. Scientists hypothesize that staying in the larval form could actually be a step backward for this species instead of a new adaptation. This is based on there close relation to another species of salamander that is terrestrial. Some scientists even hypothesize that the axolotl could have diverged from its close relative the tiger salamander. In order to do this some members of the species must have had the adaptation to not metamorphose, and then thrived in that condition passing on the genetic information so that this would be the norm for the species. It is possible for species to not metamorphose, but this is usually due to environmental conditions, whereas the axolotl is purely genetic. It is also possible for the axolotl to spontaneously metamorphose or for scientists to provide favorable conditions which result in metamorphosis. metamorphosed axolotl are very rare however so it is much more likely that they will only be found in captivity.

The next animal that I have found to post about comes from the ocean. It is an invertebrate with the taxonomic binomial nomenclature Thaumoctopus mimicus. The more common name for this creature is the mimic octopus. Since it is an invertebrate it has no bone structure and lives in the water that is slightly more dense so that its body has more stability. The mimic octopus lives off the coast of Indonesia and Malaysia about 15m deep. It prefers muddy sea floors so that it can blend in with its light brown and beige coloring. The octopus grows to be about 60cm long with 62cm long arms. It prefers an open environment because of its ability to mimic other creatures in order to sneak up on prey or avoid predators. This ability is where they get their name, but is also why I found them fascinating enough to write about. The mimic octopus is intelligent enough that it will make itself look like other animals that are poisonous to avoid predators. Not only will it mimic body shape, but it will also move like other creatures and change coloring and pattern. It is able to do this from memory, so that it can mimic another animal without that animal actually being around to watch. It is also intelligent enough to figure out which predator is around so that it can change to match another creature that the predator will avoid. The mimic octopus also utilizes a similar technique to find prey with one of the most startling uses for me of its ability is that it will mimic a crab in order to mate with another crab to sneak up and then eats the crab. The mimic octopus eats small fish, crabs, and worms. The body plan of the mimic octopus is gelatinous so that it can move its body in almost any way that it wants to, but also has siphon that allows him to jettison across the ocean bottom to look for food. After mating the female will protect the eggs and put them on the roof of her cave, while the male will die a few months after. The female will not eat while guarding the eggs and will die soon after they hatch. The mimicry of the octopus is kind of hard to describe in words so I am going to input a video so that you can see it.

The next animal that I have decided to write about is a snake with the binomial nomenclature Atheris hispida. The more common name for this creature is the African hairy bush viper. It is an unusual snake due to the fact that it is not smooth, but has scales that point up and back to resemble spiky hair. It is very venomous, and people have died from encounters with the snake. The males can grow to a total length of 29in while the females can grow to a total length of 23in. The snake is found in central Africa mostly in rainforests. The snake can climb somewhat and can be found on low hanging branches and leaves. The snake is a predator and preys on small mammals, frogs, and lizards. Atheris hispida uses its venom to kill its prey and then ingests it. It is mostly a nocturnal creature. The females of the species can give birth to 12 baby snakes at lengths of about 6in in length. Atheris hispida has many different coloration patterns from green, blue, yellow, black, red, and orange. As a snake it does not maintain its own body temperature, and so it must bask in the sun to support its needed temperature. I really liked this animal even though I usually do not like snakes because of its unusual appearance. I found that it looked really cool with its scales that are not smooth, and with the different coloration patterns that it had. The snake also uses its bright coloration as a warning to other animals to not mess with it which is why many venomous species are bright and easy to see, when people would think that most predators would want to hide from prey. 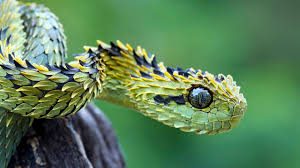 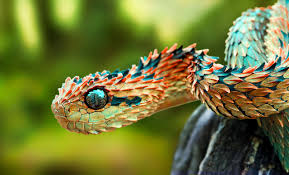 I chose to write my blog about animals that I find cool. The first animal that I have chosen to write about is the Glaucus atlanticus. The more common name for this species is the blue sea slug or the blue dragon. Being an invertebrate means that it has no bone structure. given that it lives in the water which is denser than air gives support to its softer body type. It spends its life floating upside down on the surface of the ocean. It feeds mostly on other invertebrates floating in the water but will occasionally eat from its own species. It floats upside down in the water because of its coloration which acts as camouflage. The blue dragon is blue and white on its belly to blend in with the sea to hide from top side predators such as sea birds and silvery on its dorsal side to hid from other fish below. The blue dragon has another defense mechanism to protect it from predators in the form of venom. The blue dragon stores poison from its prey such as the Portuguese man of war in its own tissues that stick out form its body so that it can sting predators. It is able to eat such poisonous prey because it is completely immune to the poison The way that the blue dragon is able to stay on the surface of water is with an air bubble that it has in its stomach. The blue dragon does not swim but is carried along by currents and wind. It has some ability to direct itself towards prey but mostly just goes along for the ride. The blue dragon is found in the tropical waters of the atlantic, pacific, and indian oceans. It can grow to be about three centimeters long. The blue dragon also has both male and female reproductive organs. Both organisms involved in mating will lay eggs that float along the surface. The larva of the blue dragon has a shell, but eventually loses it.  The blue dragon is not seen often, but can wash up close to shore, and their sting can affect humans. The sting can cause problems with the heart and lungs, fever, and shock, and in severe cases death.