The next species that I have decided to write about is named for the famous naturalist Charles Darwin, who was one of the biologists to describe the theory of evolution. This species is a spider with the scientific name Caerostris darwini. The spider was named for Darwin because it was discovered on the 150th anniversary of when Darwin published On the Origin of Species. The more common name for the species is Darwin’s bark spider. Since it is a spider it is also an invertebrate which means that it does not have a skeleton like ours but a tough exoskeleton. Since it is a spider and a carnivore it also produces venom, but is not fatal to humans. The species has sexual dimorphism which means that the females and males are very different. The females will make webs for their entire lives. The males will stop producing webs once they reach adulthood, even though they made webs as juveniles to focus on reproduction. The females can grow to be about 1in and the males grow to be about  0.25in. The males also have more of a red, black, and white coloring compared to the female black with some white coloring. The spiders are camouflaged to look like bark, and hide on the trees while waiting for insects to fly into their webs. Once an insect gets caught in the web it struggles which moves the silk strands and alerts the spider to the presence of prey. The spider will then go wrap the insect up. It is an orb weaving spider meaning that it produces a web that is circular with lines between, and does not make cobwebs. The spider lives in Madagascar on the rivers there. The interesting thing about these spiders is that even though they have a very minute size, the webs can span entire rivers. One web is known to span a 25m wide river. The spider will send out a large amount of silk that will be carried across the river on the wind and stick to a tree or other anchor, and will then build its web off of that. The large web is extremely taxing in an energy sense. To create that much web costs a lot of energy not to mention building the web as well for such a small spider. The web is able to catch a lot of prey to make up for that failing though, so that there is a lot of source for the energy required for the spider to build a web. The web-building process being energy draining is a cause of concern since the web has to be replaced every couple of days due to tears and loss of consistency and stickiness. The silk that makes this web is about ten times tougher than kevlar. It is able to withstand so much more energy impact before tearing apart or breaking strands. Scientists even hypothesize that the web could potentially catch birds or bats, but no evidence of this has yet been found. 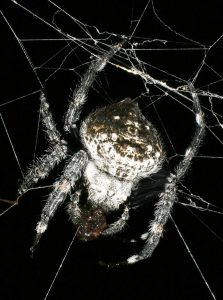 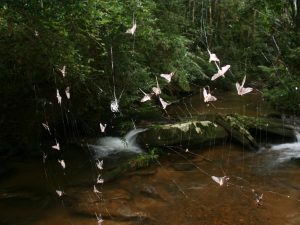